From Fabricator Case Study, Digital Templating, StoneWorld, October, 2018 p.31 – 33: A proponent of digital technology – Slabworks of Montana in Bozeman, MT is a prime example of how automated equipment, including a Proliner digital templating systems, has assisted in achieving more production with less labor. By Jennifer Richinelli 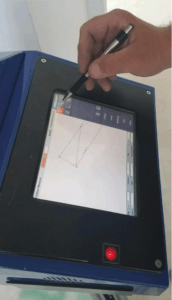 Since it was first established in 1994, Slabworks of Montana has transitioned several times to become the efficient automated business it is today. The Bozeman, MT-based fabrication ship, which is owned by Dave Scott, is an example of how digital technology has increased production and reduced labor costs.

The business was originally started as a tile installation subcontractor, and it fabricated its first kitchen in 1999 at the request of a loyal customer. In 2001, scott purchased an Achilli MBS-CE bridge saw, and four years later, Slabworks of Montana moved to its current 7,200 square foot facility and added a second Achilli bridge saw, which it purchased from Braxton-Bragg; a Pro Edge III, and a Wizard Deluxe redial arm workstation — both from Park Industries; a Kaeser twin-powered air compressor and air polishing tools from Braxton-Bragg; and an EnviroSystem from Water Treatment Solutions, which made it Montana’s first 100% water-recycling stone shop, according to Scott. In 2006 it went on to invest in an Omax 80160 JetMachining Center.

From Manual To Digital

“We were a total manual shop around 2001, and then we expanded into digital technology,” said Scott. “There was a guy I know that works with metal. We started chatting, and he said one of his friends sells machines of Omax. We started talking about CNC routers and then he asked me if I wanted a waterjet. Someone has ordered it with a good options, put down a chunk of money, but then decided they didn’t want it. He offered me a good deal.

“It was great,” Scott went on to day. “All of a sudden, we had digital technology. Basically, we used the waterjet in lieu of a fingerbit, In four or five years, the waterjet was paid off and then we bought a [Park] Fusion [sawjet]. I then started thinking that we needed a digital templating system.”

Scott explained he did his research at a StonExpo that was held in Atlanta, GA. At this time, Slabsmith was first making a debut. ” We were doing our first big commercial job”, he said. “I started talking with Blick Industries, [who was partnering with Podim at that time]. It immediately made sense to us [to purchase a Proliner]. We couldn’t think there was another way.

“All of a sudden, we were cutting work on the waterjet and using the digital templating system, and then we bought our first CNC router,” Scott continued. “We jumped to digital technology back then.”

Scott expressed satisfaction with the Proliner and said that he later invested in two more. “I think digital templating that goes to a plotter is a waste of time,” he said. “After about two or three years, the digital templating system will be paid for by not buying wood for templating. That’s the part the no one things about – and the disposing [of the wood templates]. 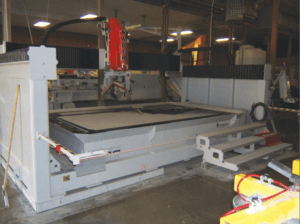 Slabworks of Montana had been on a steady rise until the economic downturn hit in 2008 – 2009. “We went from 11 employees in the shop to three,” said Scott. “We were totally automated start to finish at that point. We were doing 15 – 16 kitchens a week, down to three or four.

“It was amazing that you could like with just three people in the shop,” Scott went on to say. “We were down to five [employees] total, including the programmer and installer. The hidden beauty is when things came back around, we didn’t have to add people to expand.”

Today, Slabworks of Montana’s facility is still equipped with an EnviroSystem from Water Treatment Solutions and a Park Industries Fusion sawjet. Additionally, the shop operates Titan 2700 and 2800 CNC Stoneworking Centers, a Saber five-axis sawjet and a Fastback edge polisher – all from Park Industries, as well as a Pristine Flocculant Tower, Slabsmith software and Alphacam. The most recent addition to the lineup of equipment is a Gmm Sirio texturing machine. 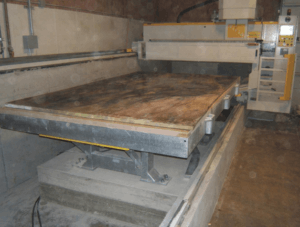 “I am in love with the Sirio,” said Scott. “It goes with a new building, which we are hopefully breaking ground on within a year. Then, maybe, we will add another one. The Sirio effectively quintuples your inventory. If you have the investment in the technology, you need to have it operating as much as you can.”

Currently, the company primarily caters to a residential market, completing approximately 15 kitchens per week, running between 800 to 1,200 square feet, depending on their complexity. “We specialize in fabricating and installing high-grade, natural and engineered stone countertops and have from 600 to 800 slabs of stone in stock in our indoor and outdoor viewing areas,” said Scott. “We work in granite, marble, limestone, travertine, quartz, Dekton®, and semi-precious stone.

Scott, who is Stone World’s 2017 Fabricator of the year, is a proponent of education and sharing ideas and information with other members of the stone industry. “We are the onluy company in southwest Montana accredited by the Natural Stone Institute,” he said. “This means our products, workmanship, business operations and trade practices have been audited by a third party and have earned the seal.”

The fabricator is also a member of the Stone Fabricator’s Alliance (SFA), a world-wide group of fabricators whose mission is “To raise the bar in the industry one fabricaor at a time. “Recently, Scott hosted one of the SFA’s workshops, which are held several times a year around the country. A total of 130 registered attended and 18 vendors were present. “I mentioned to Dan Riccio [while on one of their trips to Italy], that I wouldn’t mind hosting [and event],” he said. “I wanted to repay or put something in the ‘stone karma pot,’ so to speak. I had already gotten so much.” 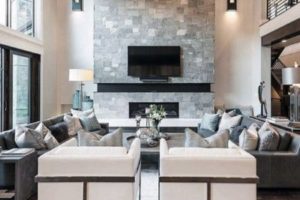 Natural Stone Fireplaces – Beyond the Brick 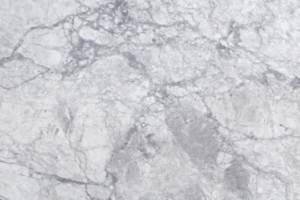 The Difference Between Quartzite and Quartz

We regularly get asked the following question: What’s the difference[...] 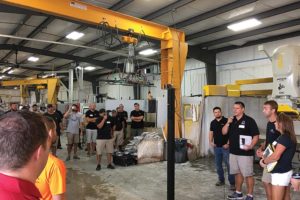